The Lockdown Decade with Jason Bradbury raises funds for CCF 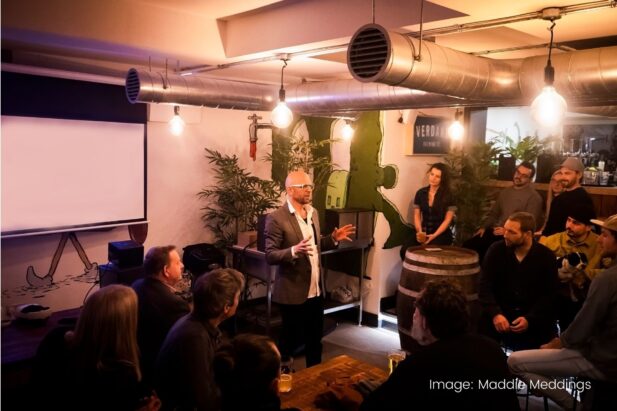 A large audience of twenty and thirty somethings, tech-savvy of course, gathered expectantly at the Sink Inn, Newquay for an evening of conversation and debate on ‘The Lockdown Decade’ with Jason Bradbury, UK technology spokesperson best known for his twelve-year stint on TV’s The Gadget Show and his stand up double act with David Walliams.

Jason opened, “The last two years have written a radical new blueprint for our next ten.” For an hour he enthralled his audience with examples of his technological past that included breaking the speed record lying on a jet-powered street luge steered by a cord (115.83 mph) and reflecting on technology over the next decade driven by the experiences of the lockdown. Discussions with the audience ranged across the Metaverse, Oculous Quest, NFTs (non-fungible tokens) and driverless transport. Jason’s message was that we will see an exponential growth of new capabilities at a pace not imagined previously.

CCF Development Director, Jeremy Ward, also talked at the event describing how many small charities had pivoted during the pandemic to use IT and digital communications to deliver their services and how many of the innovations will persist once the pandemic is over.

The Lockdown Decade evening was generously organized and hosted by Pentire who run co-working and innovation hub Pentire.house, including the Sink Inn, and software recruitment and headhunting company, the Pentire Group. Ticket donations were kindly donated to support CCF.

Tom Pugh-Jones, Partner at Pentire, says, “The last couple of years have been extremely disruptive for everyone, it’s great to hear about some of the good things that have come of it, the innovation that’s taken place, delivered by The man, The Legend, Jason Bradbury! Also the stories from Jeremy on how the CCF has been so helpful during the pandemic. The Cornwall Community Foundation helps communities and charities all across Cornwall, we can’t think of a better local charity to support!”