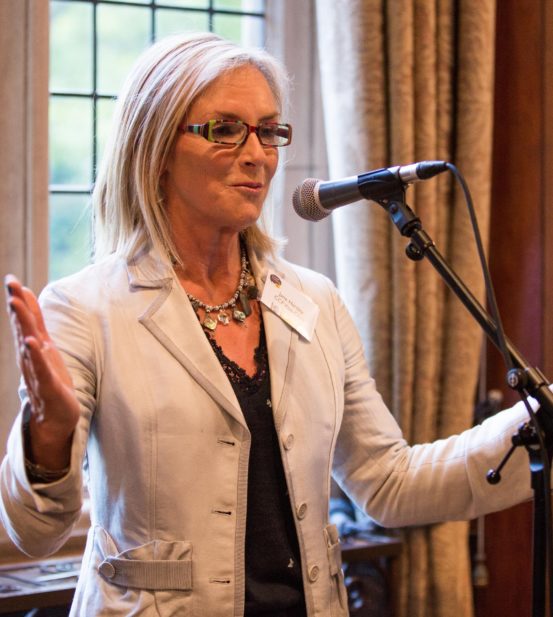 The Foundation is delighted to announce the appointment of Jane Hartley DL as our new Chair of Trustees. Jane has been a Trustee since April 2009 and Vice Chair  from 2014. She has been working closely with outgoing Chairman, The Hon Evelyn Boscawen who continues as a Trustee of the Foundation.

Jane has lived in Cornwall for more than 25 years where she is a Director of family business Trevornick Holiday Park and Holywell Bay Fun Park. She is an enthusiastic Cornish philanthropist and has served on many Cornwall Community Foundation panels, including the Grants Committee and the Events Committee. Her family charitable trust, the Albert Van Den Bergh Charitable Trust, has donated substantially to the Foundation and established a named fund.

In 2016 Jane was appointed High Sheriff of Cornwall, an independent, non-political Royal appointment, an office dating back to Saxon times.  During her year in office she actively fund-raised, including for the establishment of new fund, the Active Bodies – Happy Minds Fund that supports sport & outdoor activities for young people with mental health conditions. Her fund raising included an ultra-triathlon, for which she cycled, swam and ran the length of Cornwall in a day.

“I am delighted to have been elected as Chair by the Foundation’s Board of Trustees,” Jane says,  “I have always been inspired by giving back to the county I love. It is sad that we live in this beautiful county but that so many people are disadvantaged and struggling in their communities. The Foundation is about giving for Cornwall. It brings together people who want to support Cornwall with the communities that need help.”

She continued, “I would also like to thank Mr Boscawen for the leadership and support he has provided for the Foundation in his four years as Chair.  Thanks to Mr Boscawen and previous Chairs,  the Foundation is well placed to meet the challenges of the future and this is due to his leadership.”

CEO Tamas Haydu says, “We are pleased to welcome Jane as our new Chair of Trustees. She is a passionate advocate for the further development of the Foundation, enabling us to support even more Cornish communities.  We are also deeply grateful to The Hon Evelyn Boscawen for his support as Chair over the last four years leading the Foundation. We are delighted he is continuing as a member of the Board of Trustees.”