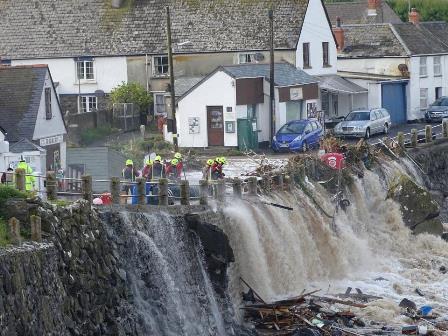 Ferocious flash floods swept through Coverack village and surrounding valleys in July, when torrential rain caused a huge amount of water to pour down the hillside into the sea. Several people were rescued from their homes, including two people who were airlifted by helicopter, roads were ripped up and about 50 properties were flooded. Working with St. Keverne Parish Council, Cornwall Council and other agencies, the Foundation immediately opened its Cornwall  Emergency Fund.

To date grants amounting to £6,505 have been issued from the Cornwall Emergency Fund to 14 applicants from Coverack and the surrounding affected areas.  The first grants were awarded within a few days of the flood.

A further four applications amounting to £2,160 are being processed and there are more applications where the amount of the claims is yet to be finalised.  Kirsty Philpott, Grants Manager says, “We are aware of other applications in the course of preparation that we have not yet received and welcome further applications.”

To support local residents, the Foundation partnered with Cornwall Live and the West Briton newspaper whose readers donated £6,909 to the Cornwall Emergency Fund for Coverack.

In another fund-raising initiative, musical director Phil Taylor organised a male-voice choir evening at Saltash raising a further £1,625 for the Fund.  Phil comments, “I arranged a concert at Saltash with over 100 male voices, soloists and we had a fantastic audience of over 200 people.  This was our way of showing the people of Coverack that those of us in the east of county are in our thoughts and prayers.”

CCF Chief Executive, Tamas Haydu, “We know that the emergency grants have been crucial to the people who have received them.  We are immensely grateful to our supporters, the readers of Cornwall Live, the West Briton and Phil Taylor for raising the funds that make the grant-making possible. We continue to welcome applications to the Fund.”