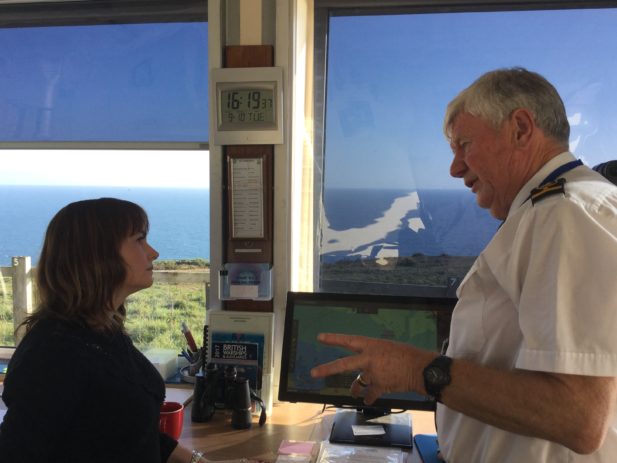 Sarah Trivett, Liskeard Branch Manager of Millerson, who are members of the CCF Business Club, visited National Coastwatch Institution (NCI) Rame Head to present a cheque for £1,000 towards the cost of a new radar.  Sarah said, “I was delighted to present this funding on behalf of the CCF C100 Business Club, a group of like-minded businesses who come together through Cornwall Community Foundation to pool their charitable giving to support local Cornish community groups. The work of NCI Coastwatch Rame Head is just the kind of vital community activity run by volunteers the business Club is keen to support.”

NCI Rame Head is one of 50 NCI stations operating around the British Isles. NCI is an entirely voluntary organisation keeping a visual watch along UK shores and each station assists in the protection and preservation of life at sea and around the UK coastline. NCI watchkeepers provide the eyes and ears along the coast, monitoring radio channels and providing a listening watch in poor visibility. They are trained to deal with emergency situations.

Colin Scott, Station Manager of NCI Rame Head, says, “We are very grateful to the CCF C100 Business Club for their contribution to our new radar. The new radar enhances the activities of the lookout in poor weather conditions, improves the response time of the watchkeepers especially in poor weather and at night when called upon by the coastguard, passing information to the coastguard in times of distress at critical periods. Since the closure of Brixton coastguard station NCI Ramehead have had to play bigger role in its observations.”

The CCF  Business Club currently has 54 members who all contribute an annual amount for grant awarding to community projects.  Since its inception ten years ago the Club has awarded more than £300,000 to small voluntary groups and charities across Cornwall and the Isles of Scilly.